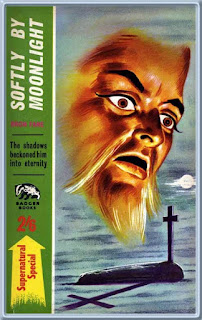 "Brinton couldn't believe the inscription when he read it in the cold white moonlight. He was looking at his own grave. He tried to read the date but the light wasn't strong enough to be certain. He returned to the graveyard by daylight . . . but the grave had gone.
He left the town in horror, but the grave followed him. He was drawn to burial grounds like iron to a magnet. It was always the same. By moonlight he saw the grave, but never the date. By day he saw nothing. One night he saw the month. Then the day; at least he saw the year. He knew he was due to die in one week. What could he do? Can a man forestall his fate? Can a mortal outwit the dark designs of destiny? Was it all in his mind? Perhaps Roger Brinton was mad? The asylum is warmer than the grave. The day before he was due to die he saw the grave again . . .  the earth was newly turned . . . it was waiting for him!"

This was the blurb on the back of a paperback I found in a secondhand shop in the 1970s. It drew me in, but when I read it my immediate impression was that it was mediocre. Still, it took some sort of hold on me. I threw away novels by Robert Heinlein and Stephen Donaldson after I had read them, but never that worn paperback by Bron Fane. Also, there were indications inside that a couple of characters formed part of a series so, after a lapse of thirty years, I decided to ask the internet about the mysterious Mr Bron Fane. What I found was astounding.

Email ThisBlogThis!Share to TwitterShare to FacebookShare to Pinterest
Labels: books

What's Got Into the "National Geographic"?

The National Geographic Magazine, to which my family has been subscribing since 1963, frequently contains article which are not, strictly speaking, geographic in nature. For many decades they have provided grants for the study of wild animals, the results of which have been published in the magazine, but at least they can be justified as being set in exotic foreign places. Ditto the forays into archaeology, and history. Nevertheless, it is hard to see the geographic justification of articles on the King James Bible (December 2011), food (December 2014), or beauty (January 2000). This is not to say that I objected to these articles; I found them very interesting. However, in January 2017 they dropped all lip service to their original charter, not to mention common sense, when they jumped onto the latest bandwagon, with an entire issue dedicated to the "gender revolution".