The Behaviour of the Koala 1. Background 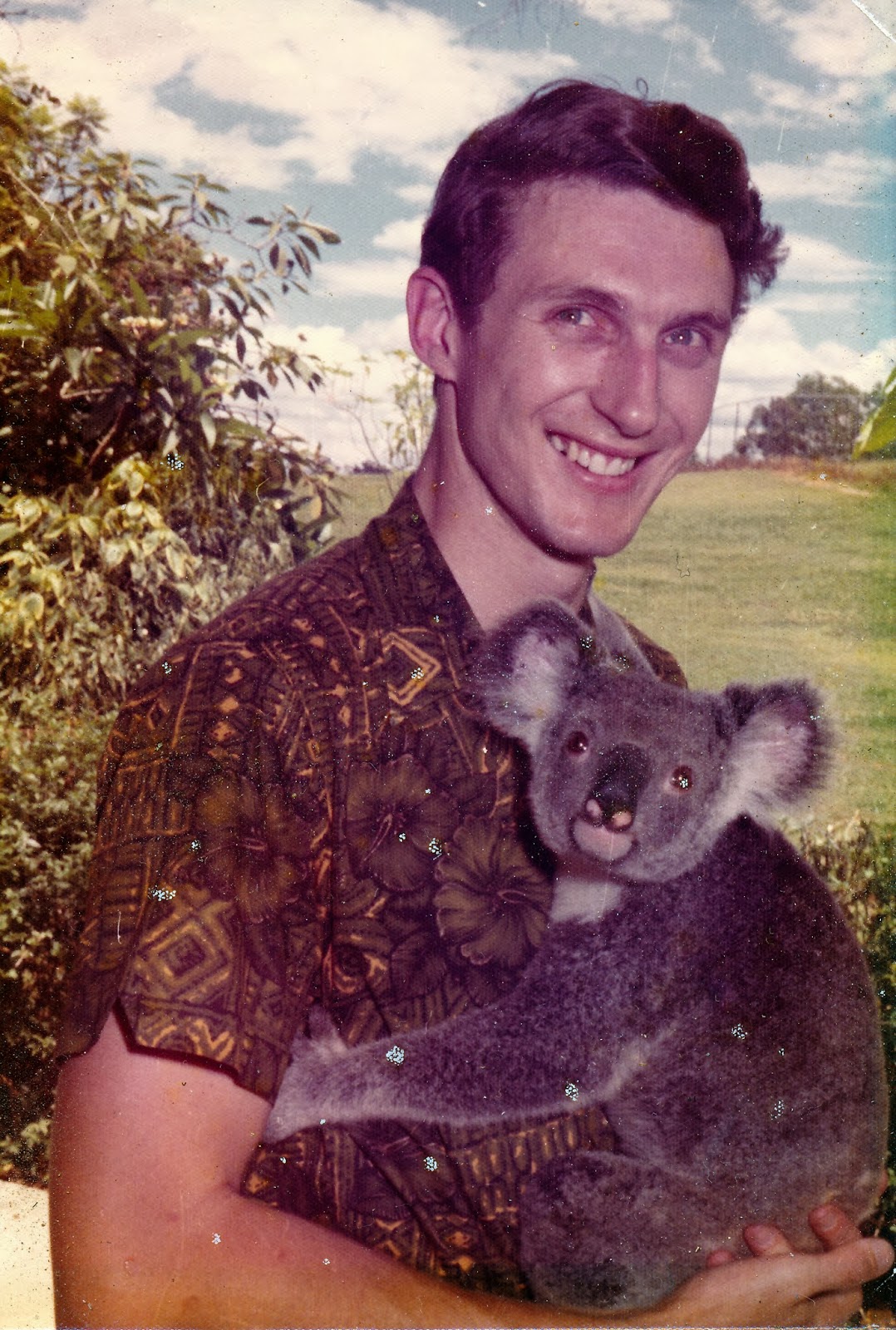 If you had visited Lone Pine Koala Sanctuary during the years, 1971 to 1973 you may have seen a strange young man sitting on a foldable cloth stool outside the main enclosure scribbling notes onto an exercise book. If the Sanctuary was quiet, he might be reading a book, his eyes flicking up to the koalas every few seconds. At other times, he might have been sitting inside one of the enclosures, or he could have been handling the koalas, or waving a camera or the microphone of a tape recorder at them.
That strange young man was me, and I was undertaking the thesis for my Master's degree at the University of Queensland. The managers of the sanctuary, Patrick and Paul Robertson were involved in martial arts, and had a special attraction to all things Japanese. They were thus friends of my supervisor, Dr (later Prof) Jiro Kikkawa, and it was he who gained permission for me to use the Sanctuary as a centre for making the first detailed study of the behaviour of this unusual marsupial.

The Behaviour of the Koala. 2. Basics 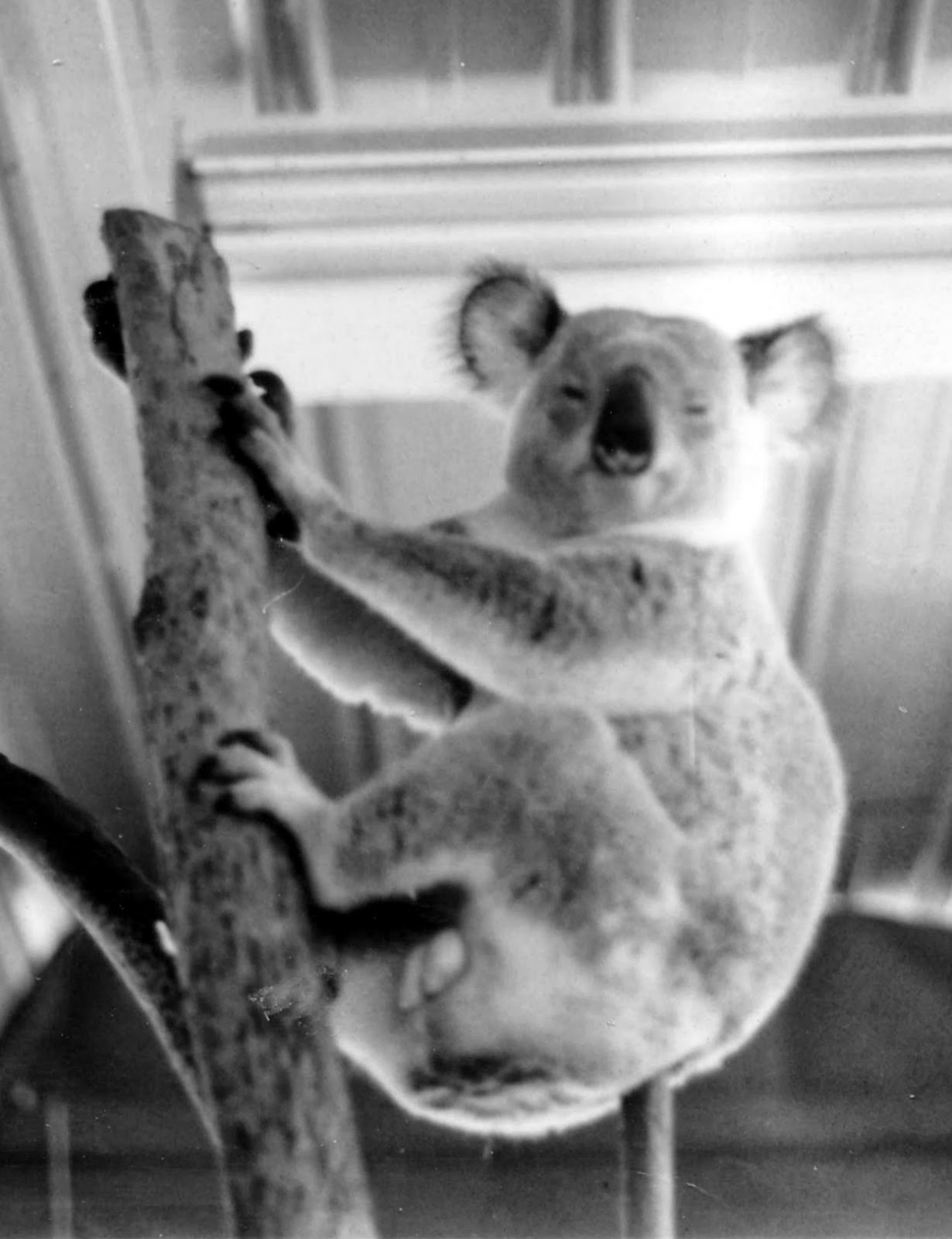 Sleeping
The first thing a visitor to the Sanctuary will notice is that most of the koalas are curled up asleep in a fork of a tree. Sleeping is their major "activity", followed by eating. Typically, the head is down and the arms folded, or clasping the tree, but the whole of their weight rests on a small section of the rump where the skin lies right next to the bone. The photo at left demonstrates it perfectly. (Yes, I know it's not 100% in focus, but please understand that this was the first time I had ever used a single lens reflex camera.) On hot days they will sprawl out in all sorts of odd positions, always taking the weight on the same spot. Cubs curl up in much the same way in their mother's laps, and adults may even sit like that on the ground, or sit like a dog, or sometimes squat like a man. When it is really hot, some of them spread out on their bellies.

The Behaviour of the Koala. 3. Bringing Up Baby

One of the most peculiar myths, which may or may not still be current, is that these gormless marsupials spank their children. I don't know where it started, or how, but it was certainly reported as a fact by Ambose Pratt in his 1937 book, The Call of the Koala. Once a visitor to Lone Pine told me, in all seriousness, how she and her husband had once heard heard a loud crying or wailing in the bush, looked up, and saw two adult koalas - Mummy Bear and Daddy Bear, no doubt - chastising Little Baby Bear. The little offender would be turned over one parent's knee and, after that parent had finished paddling its posterior, it threw the child to the other parent for a repeat performance. She recounted it with such visible sincerity, that I would have been tempted to believe it, if it weren't obvious nonsense, and it became a lesson to me for the next time I heard some other improbable tale related convincingly. It is not just that I never observed such a thing myself. It is that, first of all, nothing a baby koala could do could possibly merit punishment and, secondly, the animals do not possess the fixed motor patterns which would enable them to do so. So, with that in mind, let's look at what really happens with bringing up baby.

The Behaviour of the Koala. 4. Communication

Even a solitary, antisocial animal needs to be able to communicate, if only to say: "Get off my turf!" and the three methods of doing so are vocalisations (sounds), facial expressions, and scent. So let us start with the first one.

The Behaviour of the Koala. 6. Fighting

In captivity, koalas are mostly very placid, easy-going creatures, but when they fight, they really fight. In all cases the basic pattern is the same: an arm is thrown over the victim, which is then bitten on whatever part of the anatomy is closest.

The Behaviour of the Koala. 7. Comments and References

It is possible to become much attached to koalas. On my last day at the Sanctuary I took photos of all my favourite characters from a sense of nostalgia. I left with a feeling that I had opened a door on a social system and behaviour repertoire which was both deceptively complex and deceptively simple.