On the Scaffold or Battlefield

[T]here is not one of our simple uncounted rights today for which better men than we are have not died on the scaffold or battlefield. [Winston Churchill]

I have just returned from a brief trip to England, so I would like to share a couple of memorials I saw there. 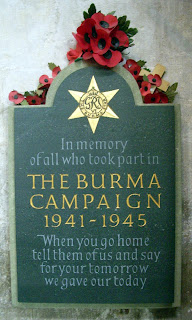 The first of these is in Salisbury Cathedral, for Salisbury is a garrison city.  What do you know of the Burma Campaign? It has been overshadowed in the popular mind by the Pacific Campaign, although it cost the lives of 22,000 British, Indian, and other Commonwealth troops, and destroyed the largest Japanese land army outside of China.
To be brief, Burma was conquered by the Japanese army in a lightning campaign commencing December 1941. After that, the British gradually moved onto the offensive. Then, in 1944, Japan invaded India. In hindsight, this was a scatter-brained plan. India was huge, likewise its army, but they had been assured by an Indian traitor that they would be welcomed as liberators - something which had never happened elsewhere. At Kohima and Imphal two titanic battles were fought - two of the greatest battles in British history, in the view of some - which ended with the retreat of the Japanese army. Then the British went on the attack, advancing right into the teeth of the monsoon. No-one had ever imagined this possible. The result was the total destruction of the Japanese forces.
I took this photograph because I knew that the verse is identical to one composed by John Maxwell Edmonds for the Imphal War Cemetery. Not only that, but it was clearly inspired by Simonides' epitaph to the heroes of Thermopylae in 480 BC:


Go tell the Spartans, you passers-by,
Here obedient to their will we lie.

It was ever thus. It should not need to be explained that Thermopylae was part of a much larger struggle for the fate of western civilisation. Our tomorrows were also on the line when these 1,400 brave men, outnumbered at least 130 to one, gave their todays twenty-five centuries ago.

Of course, it is one thing to march onto the battlefield knowing that death is likely, but still hoping to escape it. It is quite another to accept a terrible death knowing that it could be avoided by violating your conscience. 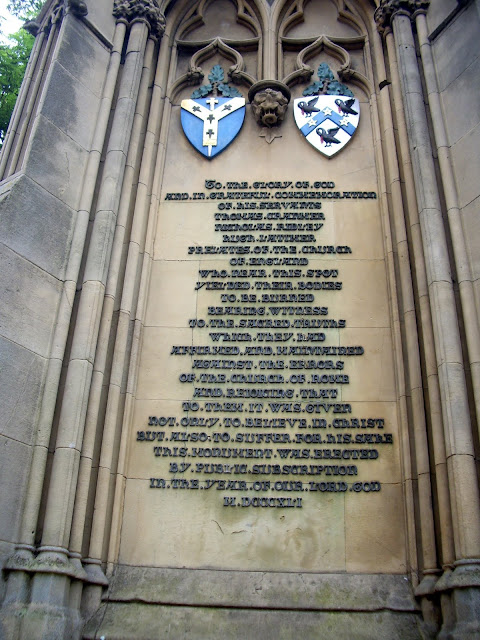 This is the inscription on the Martyrs' Memorial in Oxford. If you have difficulty reading it, you can zoom in on the page, or you can read it here.
On 16 October 1555, Hugh Latimer, former Bishop of Worcester, and later Royal Chaplain, along with Nicholas Ridley, Bishop of London, were led to the stake as part of the Marian persecutions.
By a special irony, before being bound to the stakes, they were forced to listen to a sermon by a Dr. Smith, based on St Paul's words in 1 Cor.13:2 :


Though I give my body to be burned, and have not charity, it profiteth me nothing.

Still, both refused to recant. As the faggots were laid at Ridley's feet, the crowd heard his companion exhort him: "Be of good comfort, Mr. Ridley, and play the man! We shall this day light such a candle, by God's grace, in England, as I trust shall never be put out."
Ironically, Latimer's death was relatively quick - well, as quick as came be expected for someone being burnt alive. But the way the faggots were piled around Ridley, and the fact that many of them were green, extended his agony such that the lower part of his body was consumed while he was still alive. Eventually, one of the bystanders reached out with a bill and pulled some of the faggots away, and when the flames were allowed to rush upwards, the bag of gunpowder which the victim's brother had previously hung around his neck mercifully ended his life.
Watching the proceedings from a nearby tower was a third condemned, Thomas Cranmer, Archbishop of Canterbury, the highest prelate in the land. Having witnessed their dreadful deaths, he recanted his Protestantism several times. Even so, Mary was determined to go ahead with his execution. But at his final, public recantation his courage at last returned. He recanted his recantations from the pulpit, and when he was bound to the stake on 21 March 1556, he thrust his right hand into the flames, because it had written the recantations.
Of course, these were the highest in the land. The English were used to seeing the high and mighty being led forth to execution; it was considered the occupational hazard of high office. But what horrified the nation was that most of Mary's more than 300 victims were of humble status, such as the nineteen-year-old London apprentice, William Hunter, who was caught reading the Bible in chapel without authorisation. Thus, when Mary's five and a half year reign came to an end, it was followed by a thorough revulsion of all things Papist. Latimer's prophesy has come true: the candle they lit that day could never be put out.
As we approach the 500th anniversary of the Reformation in a few months' time, it is well to remember that there was a time when merely worshiping God "by faith alone, by grace alone, by Christ alone" was an act of supreme courage.
I often wonder how I would have faced that test myself.
Posted by Malcolm Smith at 15:48